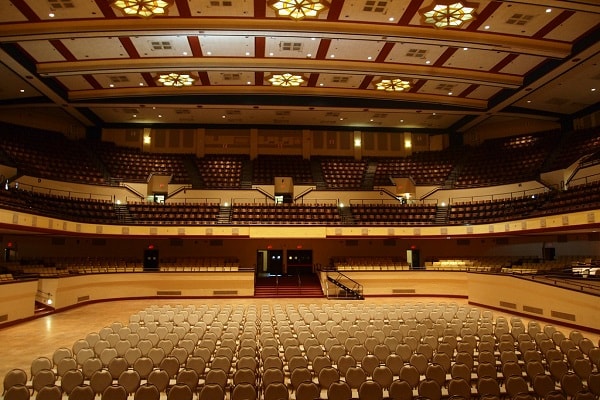 Located just west of Downtown Shreveport, lies one of Shreveport’s most treasured buildings. Built in the 1920s, it is noted for its intricate brickwork and lavish interior and has been coined the finest example of Art Deco construction in the State of Louisiana. Designed by noted architect, Samuel Weiner, the building was dedicated to the Soldiers of the Great War on Veterans’ Day, then known as Armistice Day, November 11, 1929. In its early years, the auditorium played host to the military by serving as barracks for the troops and housing the early aircraft warning system more commonly known as Radar. On April 3, 1948, a new program named, The Louisiana Hayride, began a weekly showcase of talented singers, songwriters and performers. Little did anyone realize the impact that would be made from the stage of Shreveport’s Municipal Auditorium. The Louisiana Hayride became known as The Cradle of the Stars, because so many international stars began their careers on this program. Hank Williams, Johnny Cash, Johnny Horton, are just a few of the acts that went on to stardom after performing on The Louisiana Hayride. Perhaps the most prominent performer to begin his career on the stage made his performance debut October 16th, 1954. That is when the world was introduced to Elvis Presley!